More than half of adult bald and golden eagles found to have chronic lead poisoning, new study shows 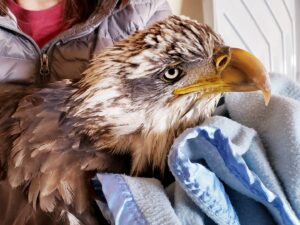 A recent study published in the journal Science examined lead levels in 1,210 eagles across 38 states—the biggest effort of its kind to date in North America.

According to the study nearly every single eagle tested had some lead exposure over the course of their lives. More than half of the adult birds had been exposed repeatedly to lead and had “chronic lead poisoning,” which left untreated can cause extreme pain and often, death.

Lead ammunition is one of the most prevalent causes of this poisoning. A single lead bullet or shotgun shell can contain several grams of lead, more than enough to hypothetically kill many eagles. Eagles consume the lead fragments when scavenging on tainted gut piles or carcasses left behind by hunters.

Lead is a neurotoxin that even in low doses (the size of a single grain of rice) can impair an eagle’s balance and stamina, reducing its ability to fly, hunt, and reproduce. In high doses, lead causes seizures and breathing difficulty, and left untreated can cause extreme pain and death.

Unfortunately, most individuals currently using lead ammunition or fishing tackle do not realize the deathly implications to these magnificent creatures – or that by making a simple switch to copper ammunition, they can help solve this epidemic. Although the implications of lead poisoning in eagles have been known for decades, no regulations have been passed to ban its use overall. Additionally, conservations have struggled to find effective methods to educate hunters and the general public about this problem.

Vincent Slabe, a co-author of the current study, is a wildlife biologist at Conservation Science Global and also a deer hunter. He has begun promoting and testing the efficacy of programs to get hunters in the U.S. to voluntarily replace lead ammunition with alternatives such as copper. “Most hunters don’t realize lead ammo can end up hurting eagles,” he says, “and are willing to explore alternatives.”

Fontenelle Forest provides raptor education throughout Nebraska to highlight the importance of raptor conservation and bring awareness to the various factors, like lead ammunition and fishing sinkers, which can be harmful and even deadly to birds of prey. Forest guests can also visit educational birds of prey in our Raptor Woodland Refuge and read their stories, several of which are unable to be released due to previous injuries involving lead poisoning.

We hope that sharing the dramatic numbers found in studies such as these will hopefully help to bring awareness to the general public, as well as hunters across the country, about this deadly epidemic. Read the article below to learn what changes you can make in your own life today and become part of the solution.