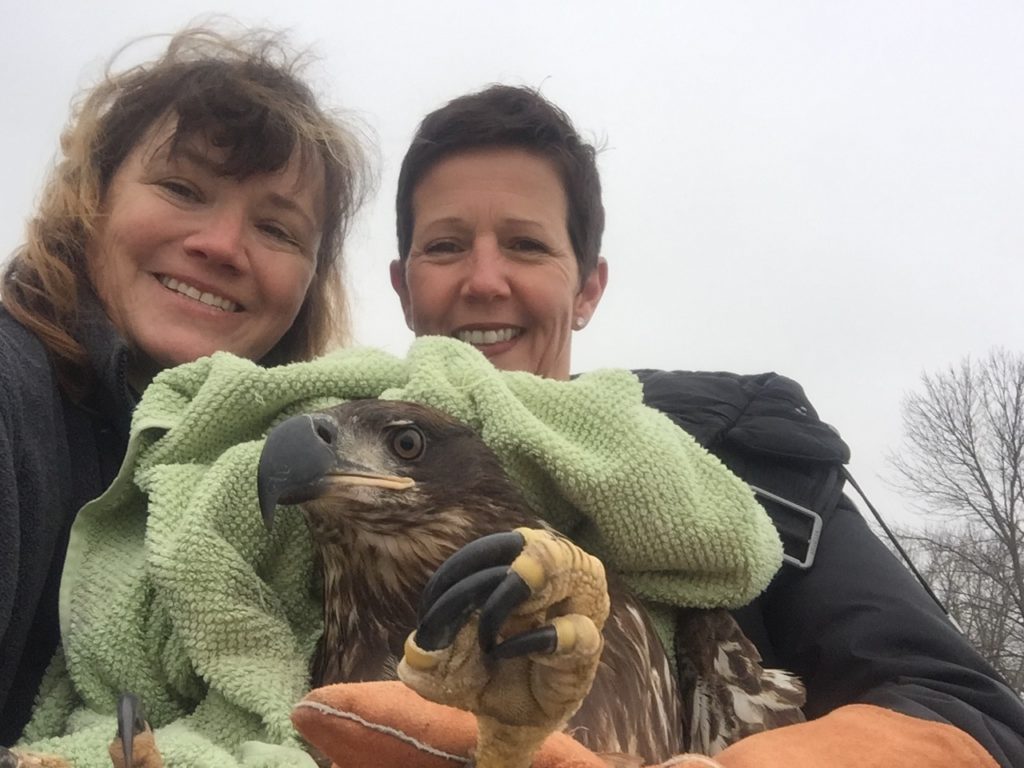 Greetings and Happy New Year Fontenelle Forest members and friends! We are excited about some of Fontenelle Forest’s recent happenings and look forward to a banner year in 2016 for the Forest.

At this writing, Fontenelle Forest’s Raptor Recovery treated 555 birds of prey in 2015. This is the second largest number of injured, sick and orphaned raptors cared for in the nearly 40-year history of the Raptor Recovery rehabilitation hospital located near Elmwood, Nebraska.

Fontenelle Forest’s Raptor Recovery recently celebrated the December release of two young bald eagles who were treated at the rehab center for injuries and lead poisoning. More than 100 people were on hand to observe the release of both of the majestic raptors at the Desoto National Wildlife Refuge near Blair. Eagles are quite social birds and the Desoto release venue increased the likelihood that the two juvenile bald eagles would mix in with some of the numerous adult eagles at the Wildlife Refuge. Desoto also provided close proximity to abundant fish and waterfowl – two primary sources of food for the raptors.

As we look toward 2016, excitement is building at the Forest as the new Raptor Woodland Refuge exhibit adjacent to the Fontenelle Forest Nature Center in Bellevue nears completion. The new interpretive raptor exhibit will feature more than twenty live birds of prey in outdoor enclosures (called mews). The grand opening of the new exhibit is planned for April 2016. In the meantime, numerous activities are underway to ready the exhibit for its feathered raptor inhabitants. Most of the heavy ‘hammer and nails’ construction activities will be wrapped up in early January. Perches will be installed in the mews in January. Interpretive signage is currently being designed and will be installed in February. Raptors will move into the mews in late winter. Landscaping will be completed in early spring. Once plans are finalized, details about the grand opening celebration of the new one-of-a-kind Raptor Woodland Refuge at Fontenelle Forest will be published on the Forest’s website.

Along with the grand opening of the Forest’s new outdoor raptor exhibit, in 2016 we plan to also celebrate both the 40th anniversary of the founding of Raptor Recovery and the centennial of the international Migratory Bird Treaty. The members of our state-wide Fontenelle Forest’s Raptor Recovery volunteer network labor tirelessly to rescue and transport injured, sick, and orphaned raptors via a modern day, pony express-style relay process. Several outstate volunteers also use non-releasable live raptors to educate the public about birds of prey conservation. Plans are underway to recognize the more than 70 dedicated Raptor Recovery volunteers across the state of Nebraska during 2016.

The Migratory Bird Treaty between the United States and Great Britain (on behalf of Canada) was signed on August 16, 1916. This treaty, along with three treaties that followed, forms the basis of U. S. efforts to protect birds that migrate across international borders. According to the U.S. Fish and Wildlife Service, the goal of the Migratory Bird Treaty centennial is to create awareness, promote key actions, increase support, and expand opportunities for engagement in the conservation of migratory birds. As you may know, Fontenelle Forest is a favorite stop-over for migrating birds in the spring and fall. Approximately 275 species of migratory birds have been identified in the Forest during migration season. Thus, it seems appropriate that we’ll be celebrating the Migratory Bird Treaty in 2016.

Finally, this is a reminder that Fontenelle Forest is a four-season destination. The more than 25 miles of hiking trails at Fontenelle Forest and Neale Woods are open all winter for hiking and snow-shoeing. In fact, one of the best times to visit the Forest is right after a new snowfall. When hiking the snow-covered trails, it’s not unusual to observe the fresh tracks of deer, turkeys, and even fox along with those of human visitors. Snowshoes are available for rental at the Forest for a nominal fee. That said plan to visit our own winter wonderland right here in metro Omaha. See you on the trails!