The presence of white-tailed deer in developed landscapes is a considerable problem in North America. An overabundant population of white-tailed deer creates problems. These problems consist of damage to personal property and plant communities, deer-vehicle collisions, and disease transmission have created demand for research and management. During the 1990s, these problems developed in Fontenelle Forest Nature Preserve (FF), Gifford Point Wildlife Management Area (GP), and the residential area and adjacent parks along the Missouri River, near Omaha and Bellevue, Nebraska.

By the mid 1990’s, it was clear that the deer problem was spatially and logistically broader than Fontenelle Forest could solve on its own. The Bellevue Deer Task Force (BDTF) was formed in March 1994 and consisted of city and county officials, local residents and landowners, FF and NGPC staff, and other personnel from natural resource agencies. The BDTF met monthly to evaluate ecological, environmental, and sociological impacts of white-tailed deer in the area; develop program objectives; review management options; and resolve problems with the perceived overabundant population of white-tailed deer. Decisions were made to implement a public information program, research projects, and controlled hunting seasons on white-tailed deer in the area. In mid-1995, the BDTF recommended conducting a controlled public hunt in FF. The FF Land Management Committee and Board voted to implement annual managed deer hunts with the goal of reducing the population of white-tailed deer to a level that would allow the habitat to recover to its former health and diversity.

White-tailed deer were uncommon in the study area from 1900 to mid-1960s. Deer began to thrive and due to low mortality and availability of abundant suburban resources, the density of deer in the study area increased dramatically.

The Fontenelle Forest staff, in conjunction with the NGPC and BDTF, established population goals for white-tailed deer. Annual controlled deer hunts began on FF during December 1996 to reduce densities of white-tailed deer.

Deer hunts have been conducted in FF during mid-December and early January when public visitation at FF was relatively low. All of FF, except the Visitor Center, was closed to public access during hunts. All hunters were required to use elevated stands and safety harnesses if they were physically capable of doing so; hunters were not allowed to stalk or still-hunt. All hunters were required to be >21 years old and show proof of having completed a bow hunter or firearm state safety course. Prospective hunters also had to pass proficiency tests. Hunters at FF were/are required to participate in a hunt orientation prior to the hunt and pay a hunt administration fee. The orientation addressed all site-specific rules and regulations, including dates of the hunt, daily registration, identifications cards, legal hunting devices, hunt areas, marking trails and cutting vegetation, registration of harvested deer, veteran hunter preference, emergency procedures, and contact information.

Hunts were administered by a hunt manager, who provided oversight to all aspects of the hunts. Volunteers and staff of FF assisted the hunt manager in registering hunters, marking hunt boundaries, providing security, and removing harvested deer. Sentries were deployed at access points to FF to limit public access during hunts.

The closure of FF and all its trails was published in the FF member’s newsletter. The main entrance to trails was at the Visitor Center, where it was easy to close trails with signage. However, 2 secondary trailheads were in more remote locations, so it was necessary to have ‘sentries’ on duty from 0800 hours to 1700 hours during days of the hunt.

Efforts were made to educate the public about management of overabundant deer and deer damage in the study area, including public hearings; deer damage workshops; newspaper, newsletter, and research articles; and Extension publications.

FF staff conducted a 2-year telemetry –based study of white-tailed deer in the area to determine seasonal movements, home ranges, habitat use, and survival of white-tailed deer in the study area and their response to hunting activity. A total of 98 deer were captured between February 1995 to March 1996 with netted-cage traps, rocket nets, and remote chemical immobilization. What the study determined is the overwhelming majority of deer living within the target area never leave the area. Most deer are born and die within one or two square miles. This only highlighted the fact that these deer were a local issue, and they needed to be addressed by local means. They are also living much longer in a pampered urban environment (w/ feeders and bird baths to drain) than their rural or “wild” brethren who deal with harder natural conditions.

Number of hunters/year at Fontenelle Forest increased from a low of 47 during 1996 to a high of 132. Present day numbers are in the 40s due to current need.

Total annual harvest of white-tailed deer at FF increased from an initial low of 28 during the first hunt in 1996 to a high of 140 in 2006 and leveled off from 2007 to 2009. Beginning the season of 2010, numbers began a downward trend; in 2014, only 10 deer were harvested during the 5 day FF managed hunt. The recent decline in deer numbers and hunter success can be attributed to several factors. A combination of great hunting pressure, the 2011 major flooding event, the EHD outbreak of 2012, and deer evolving to use the neighborhoods over FF has resulted in fewer deer within our bounds. The 2015 FF hunt is expected to produce greater deer harvest numbers with a noticeable increased population. As the herd recovers from these natural and man-made events, hunter’s success should increase along with the deer. 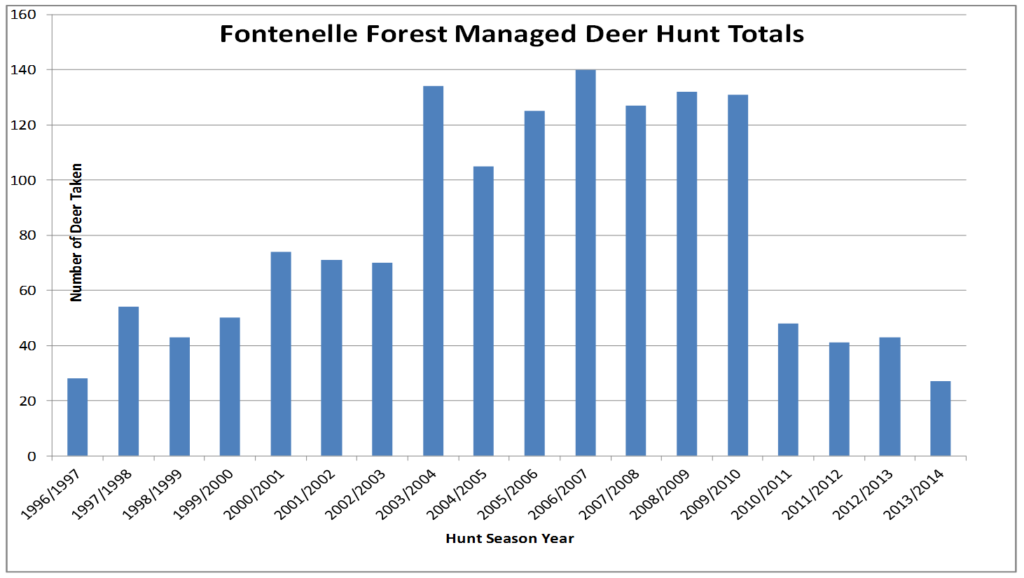