The six Fontenelle prescribed fire specialists attended the Nebraska Wildland Fire Academy the first week of April 2016 at Fort Robinson State Park. We gained new perspectives and enhanced our support network across Nebraska. This is the second year that the Fontenelle crew has attended a wildland fire academy; last year we attended the Midwest Fire Training Academy sponsored by the Big Rivers Forest Fire Management Compact in Jefferson City, Missouri. This year we decided to mix it up and stay in Nebraska in hopes of potentially gaining a rapport with other fire agencies throughout the region. A variety of classes were taken by Fontenelle Forest staff including, S-212 (Wildland Chainsaw Operations), S-219 (Firing operations), and S-131 (Type 1 firefighter). 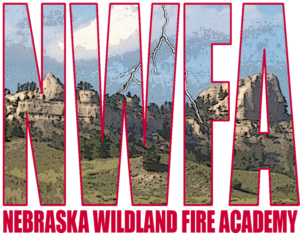 What is a Wildfire Training Academy like? Typically, there is a classroom portion which includes videos and instructor-led field observations, giving the student a more realistic vision of what on-the-ground fire operations look like. Many classes also include a field portion where students apply classroom lessons to real life applications.  For example, during chainsaw operations students learned tree felling techniques and were graded   on overall ability with different chainsaw tasks and safety.  The combination of instructor-led field experiences and classroom lessons helped our sawyers at Fontenelle Forest develop into safe equipment operators under hazardous conditions.

The Firing Operations course introduces the student to the proper planning, execution, safety, and coordination of lighting a fire for wildland and prescribed fire.  Firing plans detailing objectives, desired fired behavior, risk management and more were prepared by each student.  Definitely a lot to learn in just a few days!

In the wildland firefighting world, your rank is defined by coursework and task book items completed.  Prior to this academy, all of our staff (except one) was classified as Type II firefighter.  With more coursework and training, the goal is to continue to move into more arduous and higher-level roles.  At this year’s academy, an additional staff member from FF completed the Wildland Firefighter Type I training.  The students had to use fireline reference tools, describe how to incorporate and maintain open lines of communication during wildland or prescribed fire, and demonstrate the ability to apply the standard operating procedures.

Lastly, several firefighters completed a physical pack test during which they had to walk 3 miles, carrying a 45 pound back pack, and complete the task within 45 minutes.  After passing this test the firefighter is eligible to obtain a “red card” which allows the wildland fire personnel to be called to action in a real-life wildfire.   These challenges are designed to prepare the firefighter to perform tasks under pressure and sustain lengthy field assignments full of rigorous physical duty.

The entire training experience was an awesome, yet challenging adventure.  Not only did the arduous coursework challenge our minds, the field work challenged our physical capabilities as well. It allowed our crew to better understand each other’s strengths and weaknesses, while also challenging ourselves in a team atmosphere.  The Fontenelle Forest fire crew will continue to attend fire academies in hopes of gaining more qualifications that will help our prescribed fire regime move forward.  A safe prescribed fire program helps us all enjoy the Forest now and in the future.