March 18th was a big day for the entire Fontenelle Forest organization. We conducted our largest ever prescribed burn at Neale Woods, released two Rough-legged Hawks in the wetlands, and had a record number of attendees enjoy the Faire Faire festivities. 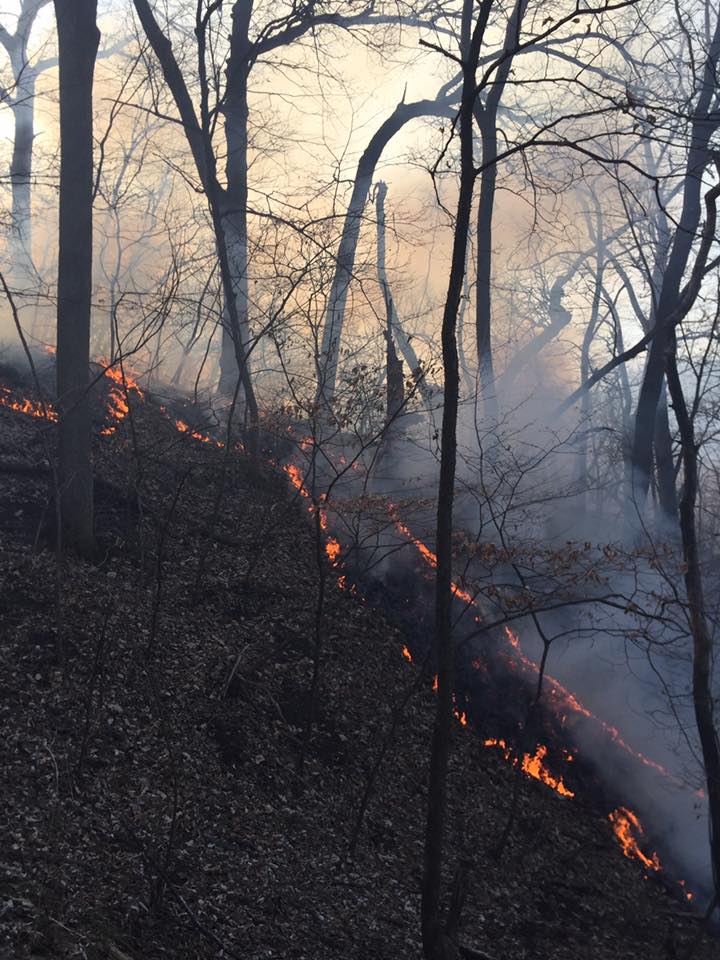 Jeanine Lackey
Director of Research and Stewardship
On Saturday, March 18th, Fontenelle Forest’s prescribed burn crew conducted a controlled burn on the largest unit in the history of Fontenelle Forest’s prescribed fire program. An 81 acre unit at Neale Woods received prescribed fire and as far as we know, it was the first time in over 100 years that this parcel of oak woodland received fire. Eleven firefighters assisted with the burn which took over 6 hours to conduct. Mopping up (cutting and pouring water on) burning/smoldering downed timber took another 20 hours.

So far this dormant season (winter of 2016-2017), the fire crew has burned over 356 acres of oak woodland and prairie, which is roughly 300 acres more than has been burned (in a controlled fashion) in modern times.

We are excited to see the results of our efforts knowing that we have been instrumental in returning this natural disturbance regime back onto our unique natural landscape. Thanks to members, the public and our supportive neighbors, we will continue to be successful for years to come. 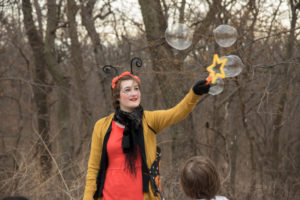 On March 18th, the Forest was overrun with fairies, elves, trolls, princesses, pirates, dragons and many other fantastical beasts. With over 900 visitors attending, our 4th Fairy Faire was our largest event yet.

Families visited the marketplace, where they traded silver beans for extra building materials, possibly selecting some dried flower petals, colorful stones or a special piece of moss to add to their fairy house. Wandering down Linden or Ridge trails, a perfect spot was discovered for building a fairy house, materials were collected nearby, and a feat of architectural greatness was constructed, fairy-sized. Seeing families sitting on the sides of the trails, working together and fully engaged in this tactile experience, the true magic of Fairy Faire was evident.

Kids and adults alike burst with excitement, viewing Fairy Bubbles, getting faces painted, creating magic wands and being sprinkled with fairy dust by the Fairy Queen. Many lucky children even got a special stick or piece of bark from the forest troll.

With birds singing in the background and laughter filling the air, Fairy Faire brought families of all ages and sizes to the forest, where they could experience the quiet wild of nature in a whole new way. It engaged volunteers, staff and our visitors in a fun-filled, engaged experience with the natural world, and what more could we ask for on a sunny Saturday afternoon? 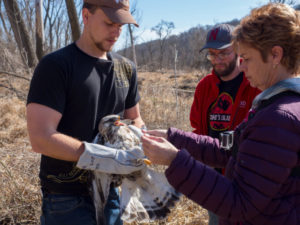 Denise Lewis
Raptor Volunteer Coordinator
March often brings cold, windy, dark days. We go about our business wishing for the arrival of the warmth of spring to appear. A lot of late winter raptor work is hard. We see birds that have struggled to survive the harshness of the long, cold winter. Some can be turned around for eventual release, some cannot.

Saturday, March 18th started out with a cold and cloudy morning. The day began with a drive to the Raptor Rehabilitation Center near Elmwood with two new volunteers. These volunteers, along with two from the Lincoln-area, are joining a new workgroup called the “Saturday Crew.” After a brief tour of the facility by Betsy Finch, Manager of Raptor Rehabilitation, we got down to business; our task for the day was to power wash as many soiled carpets as we could.

By now, at around 10:00AM, the wind had slowed and the sun was starting to peek through the clouds. Rafts of migrating snow geese filled the air as we worked as a team, making the work a bit more enjoyable.

Soon after, a group of four new volunteers arrived at the center to begin training to be volunteer transporters. Three had driven all the way from the Columbus, Nebraska area. The volunteers received another guided tour of the facility and began the process of learning how to identify a raptor, causes of injury, and emergency first aid. By then, the weather had turned into a cool, sunny spring morning.

When the volunteers finished working and training, it was time to band two Rough-legged Hawks before their afternoon release back at Fontenelle Forest. The crowd silently followed Betsy to the two story flight complex. Betsy manned the long-handled net and Elaine Bachel, a long-time volunteer, and myself donned gloves to help. After a bit of coaxing, both hawks were caught, weighed for the last time and banded with USFWS bands in preparation for release.

After banding, it was time to transport the two hawks back to Bellevue for release. Our crew for the release included Forest employees to document the release and two of the volunteers from Columbus. The volunteers were excited to help out and carried the boxed birds to the release site on North Stream Trail in the Wetlands. We also hiked by an interested mom and her 7 year old boy who joined us for the release. The afternoon still had some surprises in hand. There was an immature Bald Eagle perched and watching our activity from a distance, an elusive Mink skulked by, and a few turtles were sunning on logs as we marched by.

When it was time, our small crowd witnessed the release of two healed, migratory raptors, who flew away with grace and purpose. The group chatted the whole way back, excited about the awesome day that we had all had. What a perfect day, I exclaimed with a sun-burned face, what a fine day!