In August new plants continue to bloom, replacing species from the earlier summer months. Few new wildflowers and plants will bloom in oak woodlands across eastern Nebraska, however you can see even more flora diversity in prairies and wetlands during this time. This article with cover nine native plants that bloom at Fontenelle Forest and Neale Woods across the oak woodlands, prairies, and floodplains

Woodland lettuce is quite common in forest clearings and along wooded streams. You can identify it by its height and numerous blue flowers.

Wingstem is a tall sunflower species that grows in open wooded areas. This plant has yellow flowers of uneven lengths and stems with thin protruding margins (wings) traveling upward.

Catnip giant hyssop is a large woodland mint species with small yellowish flowers in dense spike-like clusters. The common name is misleading as this mint does not share the same fragrance or habitat as catnip. It grows in moist woodlands and along woodland edges. 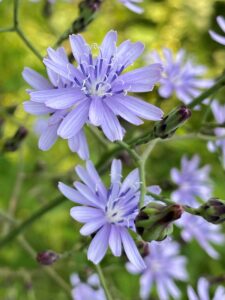 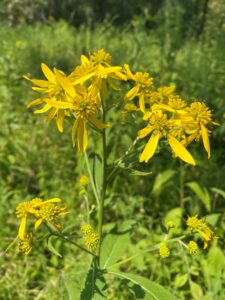 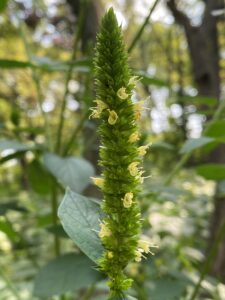 Round-headed bush clover is common in all the prairies throughout Neale woods. The dense ball of flower heads have both white and red striped blooming flowers, which are pollinated by insects, as well as small buds that never open, which ensures self-pollination.

Flowering spurge is common in the drier portions of Jonas Prairie at Neale Woods. This plant might at first appear to have white flowers, but these are bracts, which are modified leaves that look like petals. Multiple small male flowers encircle a single female flower. By August, the female flower will arise from a protruding ovary. 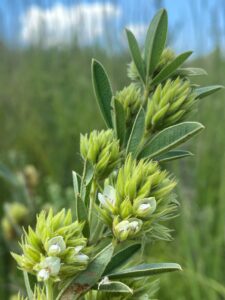 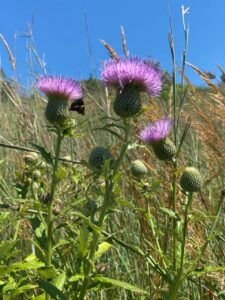 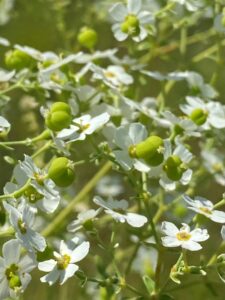 Fontenelle Forest has two pink-flowered Joe Pye weed species – one in the oak uplands and the other in the floodplain. The much showier spotted Joe Pye weed blooms in August in high-quality wetlands. These are tall plants with tight clusters of small purplish flowers. Spotted Joe Pye weed can be observed in wet, shaded areas along North Stream Trail and near the bridge at Handsome Hollow marsh.

Eastern virgin bowers is a woody vine with male and female parts on separate plants. Large colonies climb on trees and shrubs in the floodplain trails of Fontenelle Forest.

Another vine blooming in the north floodplain is hog peanut. Look for climbing herbaceous plants with leaves of three and clusters of pale blue to white flowers.

After August ends, one more month of the growing season will remain. Wild plant diversity will peak just before the onset of cold weather. The cycle will begin again in March of the next year with the first early spring ephemeral and tree blooms. 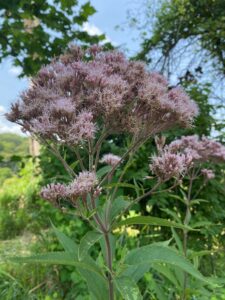 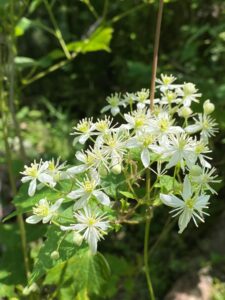 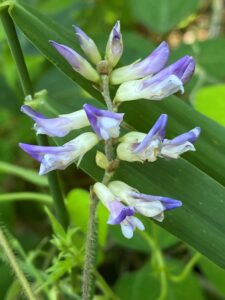 You can help us protect all of Fontenelle Forest’s wildflowers by following a Leave No Trace policy by not picking or collecting any plants. Please leave everything where you found it for other guests to enjoy. For more information on Leave No Trace visit lnt.org.