September marks the peak of late summer flora diversity in Eastern Nebraska. A large spike in new blooms from just a few types of plants arrives before the onset of cold weather. Many plants that bloomed earlier in the year will start producing mature seeds and that will disperse now through October. This article with cover nine native blooms and fruits that occur in the oak woodlands, prairies, and floodplains at Fontenelle Forest and Neale Woods during the month of September.

September is aster season; twenty distinct species start blooming in various habitats across Nebraska. The Fontenelle Forest and Neale Woods oak uplands have at least three species of aster. The blue to white flowered arrow leaf aster is the most common of the three. Look for this plant along any trail in the oak uplands and lowlands. Jack in the Pulpit blooms in the spring and is common in moist rich forests. In September, it will produce bright red berries. These fruits are toxic to humans but are consumed and dispersed by birds, particularly turkeys. Elm-leaf goldenrod is locally abundant at Fontenelle Forest in the oak uplands along Prairie Trail. This is the only population known in Sarpy County. The only other populations known in Nebraska are in Nemaha and Richardson counties, especially at Indian Cave State Park. It is a myth that goldenrods causes allergies as they are insect pollinated. Wind pollinated plants such as ragweed and pigweed are the main culprits for seasonal allergies. They bloom around the same time as goldenrods and release excessive amounts of pollen into the air. 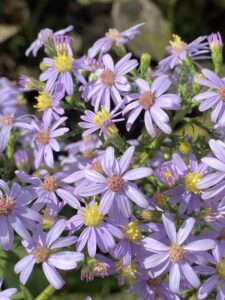 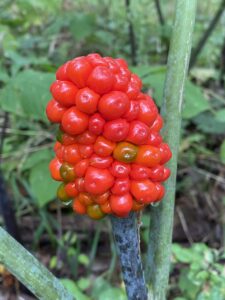 Jack in the pulpit 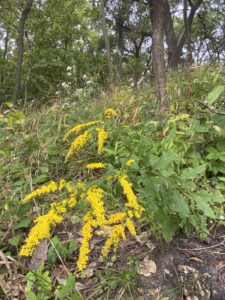 Downy gentian is one of Nebraska showiest native prairie plants with its intense blue flowers. This plant is a rare find in the prairies at Neale Woods. New England aster has long been cultivated in gardens, but it is also a native wildflower in Nebraska. Wild plants grow in low, damp meadows and streamsides. Look for large purple to pink flowers in the bottom of Jonas Prairie. Tall boneset is a perennial sunflower with numerous tiny white flowers. It is abundant in drier portions of the Hilltop and Nebraska Prairie reconstructions at Neale Woods. 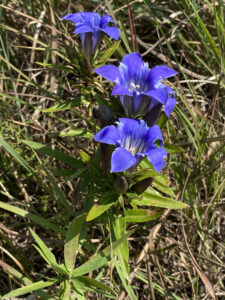 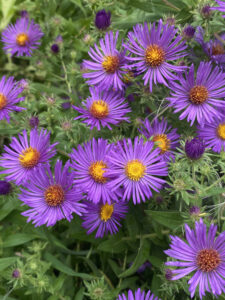 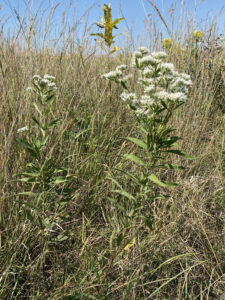 Cutleaf coneflower is closely related to black-eyed Susan and should be in full bloom by early September. It is common in both the Neale Woods and Fontenelle Forest floodplains in marshes and moist woods. Bur marigold is another yellow sunflower species that is common in marshy areas in the Fontenelle Forest floodplain and on the banks of the Missouri River at the end of Child’s Hollow. This plant’s seeds have four barbed structures on one end that attaches to clothing or fur to help the seeds travel away from its parent plant. Large colonies of late boneset grow in open areas in the Fontenelle Forest floodplain and along the Missouri River. Look for tall plants with small white flowers. It can be distinguished from tall boneset by the wet habitat and the leaves have a noticeable stalk attached to the stem. 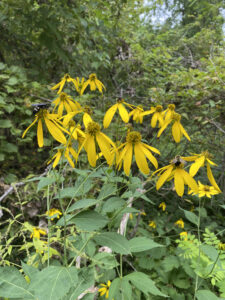 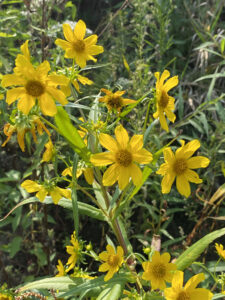 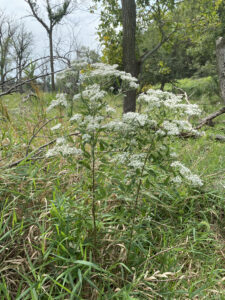 The beginning of fall marks the end of new wildflowers in Eastern Nebraska. Each growing season month from March to September tells a different story of the delicate balance of the wild plants that emerges, blooms, and releases seeds at specific times each year to reduce competition with other plants.

You can help us protect all of Fontenelle Forest’s wildflowers by following a Leave No Trace policy by not picking or collecting any plants. Please leave everything where you found it for other guests to enjoy. For more information on Leave No Trace visit lnt.org.