During Fontenelle Forest’s 100-plus years in existence, the wildlife which resides in and around the Forest has interacted with humans and our infrastructure in various ways. Some animals adapted, some left the area, and some thrived. While populations ebb and flow, humans can have unintended effects on where and how animals move and live. 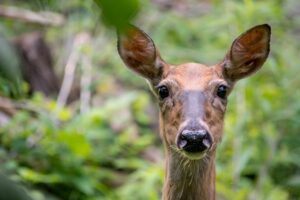 In order to keep both our human friends and wildlife healthy and safe, we ask that our members and guests follow leave no trace principles – which also extend to wildlife. For more information on Leave No Trace Principles, visit lnt.org.  In a nutshell, this includes:

While some actions may seem innocent, they can have negative consequences. For instance, trying to get an up-close look (or the perfect photo op) can cause wildlife to scatter. It may cause them to feel unsafe or disturb their habitat. If they have offspring nearby it may make them feel threatened and/or cause an otherwise docile animal to become defensive.

The consequences of Feeding wildlife

Additionally, feeding wildlife can cause a host of issues. Recently, we have been finding (and removing) peanuts and crackers left along the boardwalk. While people may feel they’re being helpful, they are potentially endangering the animals and other visitors.

When visitors feed wildlife, they become dependent on it, and may lose their foraging skills. Wildlife also adjusts feeding behavior seasonally, so supplemental feeding can alter that behavior. People food can make our wildlife sick, as well. They have specialized dietary needs which can be met in their habitat, which is what we are working so hard to maintain and restore. Animals can’t digest or use the nutrients from human food, as their bodies have evolved to process their natural food for optimal nutrition. If there is a certain location animals learn they can get fed, there will be larger groups of animals there, making it easier to spread diseases between them. Feeding wildlife can also cause an artificial inflation of population, which increases the likelihood of disease.

It’s also easier to spread diseases from animals to people when we increase our interactions with wildlife. Wildlife that gets too comfortable around humans oftentimes become aggressive and may even grab food from people. They can damage property too, while large groups of animals seek out human food. We’ve seen raccoons damage trash cans, and squirrels get WAY too friendly with visitors! The increase in nuisance animals puts extra pressure on both our local wildlife rehabilitation specialists and Animal Control. Especially within and around Fontenelle Forest, having animals lose their fear of humans and our machines increases the chances for collisions with vehicles on the road. Sadly, we’ve had to pick up many animals in our driveway and the street at our entrances.

Pack it in, Pack it Out

There are also items people leave which could look or smell like food to animals. For example, litter may smell like food, and be consumed. Shiny and colorful objects, like painted rocks, can be mistaken for berries and nuts. This could cause birds to damage their beaks, essentially making it so they are unable to eat. Other animals may eat an object and then not be able to pass it, causing illness or even death. We remove these objects when we see them and ask that visitors refrain from leaving behind anything in the Forest.

The best thing people can do to ensure safe wildlife viewing (for both humans and animals) is to allow them their natural habitat – safe and undisturbed. Here at Fontenelle Forest we are striving to improve the various habitats that exist on our land in order to provide a healthier home for the native plants and animals. We encourage you to visit the Forest and observe wildlife while hiking our trails or strolling the boardwalk – but respectfully ask you to do it in a manner that is safe for humans and the wildlife. Meanwhile, we will work to restore and maintain their home for the next 100 years!