In 2023, Fontenelle Forest will be celebrating the 200-year anniversary of the trading post operated by Lucien Fontenelle. This trading post was built and occupied between the winter of 1822 and 1823 north of the Platte River. 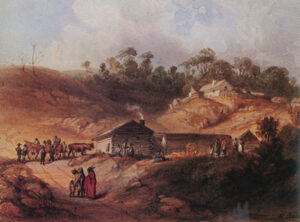 In 1822, Joshua Pilcher was the senior partner for the Missouri Fur Company and was using the old Manuel Lisa trading post near Fort Atkinson for his business. There was “trouble” on the upper Missouri, where most of their trading had occurred, so Pilcher decided to shift his focus to the new trade routes along the Platte River into the Rocky Mountains.

According to a letter from Pilcher, “initial construction occurred prior to the onset of winter in the latter months of 1822.” Another reference describes the post as “operational by June of 1823.” James Kennerly, who was a sutler at Fort Atkinson, indicates in his diary of 1824 that Lucien Fontenelle was at the post where he “was in charge of the supply room and ledgers.”

Once established, the post became a focal point of the western fur trade over the next 20 years and a spot where famous “mountain men” and explorers would gather. The trading post also engaged with neighboring members of the Omaha, Otoe and Pawnee tribes.

Learn more about the trading post at new our exhibit opening spring of 2023! Watch our website and social for more details.